I've always been leary with regards to the increasing use of e-voting. In theory, I think it's a great idea whose time has come. Practically, I've been concerned with the concept mainly because it seems to me the vast majority of e-voting machines lack a verifiable paper trail.

I'm far from expert in the technology, but I think of it like the unending "competition" between anti-virus software and viruses (including trojans, worms, adware/malware/spyware, what have you)--a new virus is detected, a counter-measure is developed, and another virus crops up. I'm worried that the same thing could happen with e-voting technology--and do we really want to deal with something like that with something as vital as voting? Software companies are on constant watch for potential and emerging attacks. I don't get the impression that e-voting machine companies are doing the same thing--whether because they don't think they need to, or because they don't have to, or they need a new publicist.

Anywhoo, what brought this up was an article I saw on cnet talking about a study where investigators were able to tamper with an e-voting machine. As written in the cnet blog:

"... a pretend presidential election in which George Washington receives four votes to Benedict Arnold's one. Yet, when the voting machine is queried at the end of the day, its paper printout states that Arnold received three votes to Washington's two. Even the memory card, designed as a backup, reports the same fraudulent result. There is no way for an observer after the fact to disprove that voters did not give Arnold three votes to Washington's two--except that we saw in the video that the voters did in fact vote differently. The researchers at Princeton exploited well-known software flaws with the Diebold Accu-vote-TS voting to construct their malicious code..."

Here are links to the cnet original post and to the study itself (pdf).
Posted by r32argent at 13:39 No comments:

Ugh. At Home Depot this morning they were selling Hallowe'en decorations. Big orange inflatable pumpkins. Double ugh. Can't they at least wait until October?! Stores seem to insist on selling holiday/special day items earlier and earlier, and every year it annoys me. Consumers revolt! Refuse to buy Hallowe'en items until October!
Posted by r32argent at 08:27 No comments: 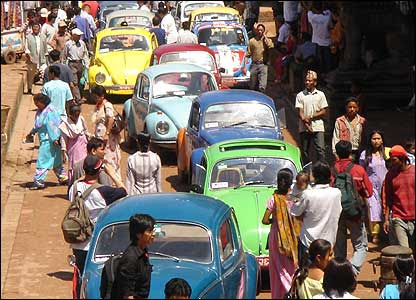 Wow, I saw this very brief article on the BBC news website. It has pictures of the An-Bug (The Association of Nepal Beetle Users Group) 6th rally in Katmandu. For a link to the site for the rest of the pictures, click here. According to the captions, there are 84 listed Beetle owners in Nepal, including the German Ambassador, Franz Ring. 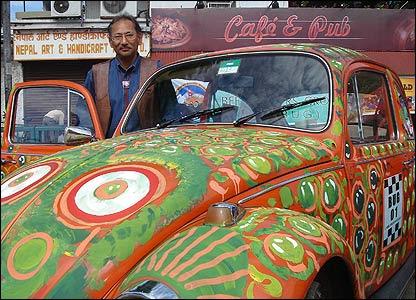 Ummm... in the interests of clarity, a FYI: the above picture is of the An-Bug president, not Ambassador Ring. :o)
Posted by r32argent at 16:42 No comments:

This is probably old news, now, but since Trevor Linden is one of my favourite NHL players I thought it deserved a mention. Linden has been re-signed for a $600,000 one-year contract with the Canucks. At 36-yrs old, I'd been wondering how much longer Linden would be playing, and whether or not he'd be staying.

One curious thing is that I found this news not on the Canucks official site, but on CNN. Eh?
Posted by r32argent at 16:07 No comments:

Congratulations to Roger Federer, who won his 9th major title, today, defeating Andy Roddick 6-2, 4-6, 7-5, 6-1. I was hoping Roddick would pull through, but it didn't happen. After the first set, I thought Roddick was done. Second set, Roddick stepped up, and I was hopeful for an upset. Third set, 3-3, Roddick had 3 break points at love-40, but Federer pulled it out and eventually won the set. After that, Roddick was really done.

What I want to see is someone able to force Federer to play his best tennis for the entire match. Nadal is capable of this on clay, but I'd like someone--anyone--to be able to do the same on grass and hard courts.

Anywhoo, Federer only needs to win six more to beat Pete Sampras' record of 14 major singles titles. That's still quite a few more to go, but Federer has reached the finals of the past six majors--this year winning them all except for the French Open. At only 25 years of age, Federer has plenty of time to claim this record all for his own.

One of the major things ;o) that really annoys me about tennis reporting is how they've started calling the Australian Open, French Open, Wimbledon, and the U.S. Open "Grand Slams". I find that very disconcerting. I've always thought of a "Grand Slam" as winning all four major events in the same calendar year. These days, however, I read/hear writers and reporters saying "Sharapova has won her second grand slam" or "Roger Federer has won his ninth grand slam title". Eh? When did they change majors into grand slams? Why did they change majors into grand slams? Confuuuuusing.
Posted by r32argent at 20:02 No comments:

There's no way I can recite all of Navratilova's accomplishments here, but you can take a look at Martina Navratilova's official site or her page on Wikipedia for indepth information.
Posted by r32argent at 19:30 No comments:

Maria Sharapova defeated Justine Henin-Hardenne, 6-4, 6-4 to win the 2006 U.S. Open--Sharapova's second major title. I particularly enjoyed this year's final because these two are my favourite women players that are currently active--so from my point of view either of them winning was a bonus. :o)

Sharapova looked a little nervous at the start of the first set, but if I recall correctly that was the only time she was broken. Despite some great points and winners, my favourite part of the match was watching Sharapova's reaction after winning match point--she just looked so ecstatic and over-joyed. :o)

One thing that continues to annoy me, however, is how some people insist on screaming endearments/encouragement to their favourite player *in the middle of their serve*. What the heck is up with that?! One particular moment in this match stuck out--some guy screamed his love for Sharapova in the middle of her toss. I know the players are professionals and being used to it they should be able to ignore it... but do the overly enthusiastic fans really want to risk it being that one time when it *does* affect their concentration? Show a little consideration, please.

Update: I just noticed--the above picture looks like Sharapova is missing some teeth, lol. At least, it does on my computer. :o) Anywhoo, click on the picture to see that Sharapova doesn't *really* need a new dentist.
Posted by r32argent at 21:20 2 comments:

The full list of visitors for August 2006 is here.

FYI, follow the link for statistics for previous months.
Posted by r32argent at 19:53 No comments:

I used this long weekend to finally fulfill one of my long-held desires... to see the Space Shuttle Enterprise in person. I figure this is actually the closest I'll ever get to being in space myself. :o) The Enterprise is kept at the Steven F. Udvar-Hazy Center which is the companion facility to the National Air and Space Museum on the National Mall.

There were a lot of other interesting exhibits at the Steven F. Udvar-Hazy Center, but as you might have guessed the Enterprise was the primary attraction for me. There's an IMAX Theater as well as a couple simulator rides ($7.00 each), one of which took you up in a space shuttle to see the International Space Station. I thought it was expensive for how short the ride was--but I did find the lift-off and landing parts highly enjoyable. Just getting a feel for what it might be like to take off and land was great. :o) The Canadian in me was gratified at the mention and cameo of the "Canada Hand" but annoyed when it referred to the "Canadarm" as the "robot arm".

Anyhoo, here are some pictures, and I might post some more later, but a lot of the pictures I took ended up being too dark--I guess my camera needs a more powerful flash. :o(

These are the voyages....

Hmmm, somehow one of those pictures seems a little premature....
Posted by r32argent at 20:55 3 comments: